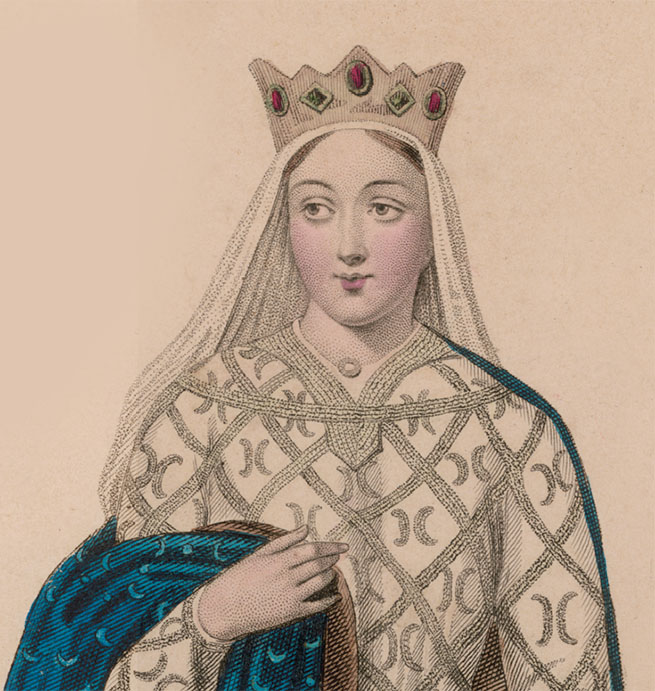 Life Is What You Make It: Leadership Lessons From Eleanor Of Aquitaine

Eleanor of Aquitaine was not only a boss at all of the above-listed skills, she could read and speak in at least THREE languages: her mother tongue, Poitevin2, Latin, and Anglo-Norman French3

What do you get when you combine all that ability with beauty, intelligence, a strong-will, a massive estate (larger than that of the King of France himself)4 and a family name that holds as much cachet as the Lannister name does in Westeros?

The most powerful and wealthy woman in 12th-century Western Europe!

The Queen of France

In 1137, the death of her father made 14-year-old Eleanor the most eligible bachelorette in the 12th Century Europe: Middle Ages Edition game of royal matchmaking.

Eleanor didn’t waste any time before marrying Louis VII of France. The two were crowned Queen and King of France on Christmas Day that same year.

Fun fact: Eleanor of Aquitaine’s first marriage may be the reason we have built-in fireplaces.

After having lived in southern France her whole life, Eleanor was shocked by the frigid temperatures in the north and had them installed (for the first time) when she renovated the palace in Paris.5

During their reign, Eleanor and Louis VII embarked on the Second Crusade. Rumors of affairs combined with failing efforts and a disjointed military force understandably drove the couple apart.

It quickly became clear that Louis VII was a less than effective military leader: he was weak and known to make uninformed decisions.

On the other hand, Eleanor was bold and determined – she decided to join her husband on the campaign.

The Church disapproved of Eleanor’s plans to join her husband on the Second Crusade. Women were not meant to accompany their husbands in battle or go against the wishes of the church.

Eleanor wasn’t down with being told what she could and could not do. She not only joined the crusade but brought along 300 women dressed head to toe in battle attire. Although none of them actually fought (that we know of), it was a big f*ck you to the church and societal norms.6

Eleanor was compared to Penthesilea, mythical queen of the Amazons. We see you, Queen E!

Lesson: If you know you can do something awesome, but everyone says you can’t, do it anyways!

After 15 years of marriage and no male heirs, the couple had enough. Louis VII finally agreed to Eleanor’s repeated requests for an annulment. He accepted on the grounds of consanguinity, i.e., they were too closely related to be man and wife (ick!).7 King Louis was granted custody of their two daughters while Eleanor was able to keep her sizeable French estate.

The Queen of England

In 1152, just eight weeks after her annulment from the King of France, Eleanor, now 30 years old, married Henry Duke of Normandy. He was heir to England’s throne and 11 years her junior.

Most powerful and wealthy women in Western Europe and one of history’s first sugar mamas?

Two years later, Eleanor and Henry were crowned Queen and King of England. Their marriage lasted roughly 40 years, during which time Eleanor gave birth to three daughters and five sons. Most of their children were strategically married off across Europe in order to secure loyalty to the family’s rule. The House of Plantagenet would go on to rule England and parts of the continent, more or less successfully, for the next 330 years.8 Eleanor should have been nicknamed the “Grandmother of Europe.”9

Lesson: It doesn’t hurt to have allies in powerful places. Sometimes it’s not what you know, but who you know.

In 1167, the couple reached a breaking point. Eleanor essentially (not legally) separated from Henry II and with his army escort, we mean blessing, went back home to live and rule Aquitaine, France. Aquitaine had always remained loyal to their beloved Duchess.

Eleanor was a great patron of arts. She turned her court into a model of chivalry and a mecca for poetic inspiration. The most famous troubadours of the time were frequent visitors to the Court of Love.

Alas, this period of love and beauty was not to last.

Eleanor’s sons staged a rebellion against her estranged husband, King Henry II, which she supported by providing them with considerable military support and money. Many believed her choice to defy her husband was rooted in jealousy, as King Henry VII was known to have had many public affairs during their marriage. Others argued Eleanor’s decision was a strategic one, motivated by her desire to preserve her family’s status and keep Aquitaine safe.10

When the rebellion failed Eleanor was accused of high treason and spent the next 16 years imprisoned by her husband in England. It wasn’t until King Henry II’s death in 1189 that she was finally released.

Eleanor didn’t waste any precious time when she got out!

Her son Richard, affectionately known as Richard the Lionheart, inherited the throne and she, the role of Queen Regent.

Lesson: Never give up! Good things come to those who wait (and who support their children in strategic rebellions against their cheating husbands).

Eleanor rose to the occasion…

…just kidding, she was born for this job!

As Queen Regent, Eleanor stepped into her greatest leading role yet.

After becoming King Richard I, her son quickly set out to lead the Third Crusade, which left his mother in charge of the realm. Eleanor, having had firsthand crusading experience, saw the crusade as nothing more than a distraction from her ultimate goal, i.e., to secure her family’s status and the reign of House of Plantagenet.11

Eleanor ruled like a boss and kept the throne safe from more than one attempt to overthrow it and steal the crown.

On King Richard I’s way home from the Holy Land, he was captured by the Duke of Austria. Eleanor not only negotiated her son’s release but traveled to Austria to bring him home to England herself.

In 1199, Richard died without an heir. His brother John (ironically one of the men who attempted to steal the crown) was crowned King of England. John appointed Eleanor, his mother, to England’s ambassador of France.

Fearing her family’s reign would soon fall apart, Eleanor (now 80 years old) made the long and treacherous journey over the Pyrenees in order to retrieve her granddaughter and marry her off to the son of the French King. This match maintained peace between the two countries and further secured her family’s status and claim to power.

Lesson: If you want something done right, you have to do it yourself.

Does her story remind you of anyone?

We aren’t saying that there is a direct correlation between the two, but let’s look at the facts: they were both powerful, wealthy, intelligent, strong-willed women who came from important families, always found their way back to the throne and had sons named Ge(J)offery…

We’ll leave it there.

Eleanor of Aquitaine retired, became a nun (just to check another box off her “life achievements” list), and died at the monastery in Fontevrault in 1204.

The nuns who wrote her obituary called her, a queen “who surpassed almost all the queens of the world.”12

This article first appeared on museumhack.com on March 27, 2018.

2 thoughts on “Life Is What You Make It: Leadership Lessons From Eleanor Of Aquitaine”